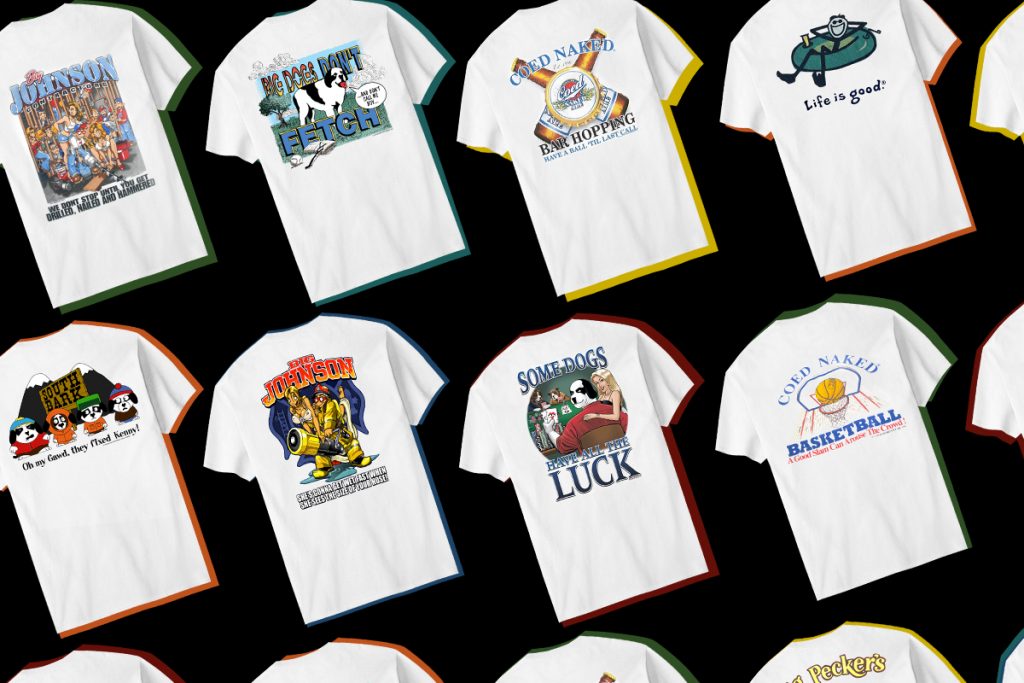 Thanks to a few enterprising brothers, the new apparel options were plentiful: For the Mellow pothead or spiritual bro, there were Beach Bums, Peace Frogs, The Mountain, Life is Good, Tropix Togs and Hypercolor. Aggro or sporty dudes had AND1, No Fear and Just Hafta. Then, of course, the most infamous and fondly-remembered of them all: the “I’ve-gotta-big-one-and-bigger-attitude” who wore Big Johnson, Coed Naked and Big Dogs.

For simplicity’s sake, let’s call these novelty shirts “D-shirts” or “Douchebag shirts,” whichever you prefer. Most of these D-shirt brands as we knew them are, for all intents and purposes, defunct.  And while several of these companies toed the line of good taste in the early 1990s, their products almost seem quaint today when compared to the calculatedly hateful marketing practices by major brands such as Abercrombie, American Apparel or Urban Outfitters in this millennium. 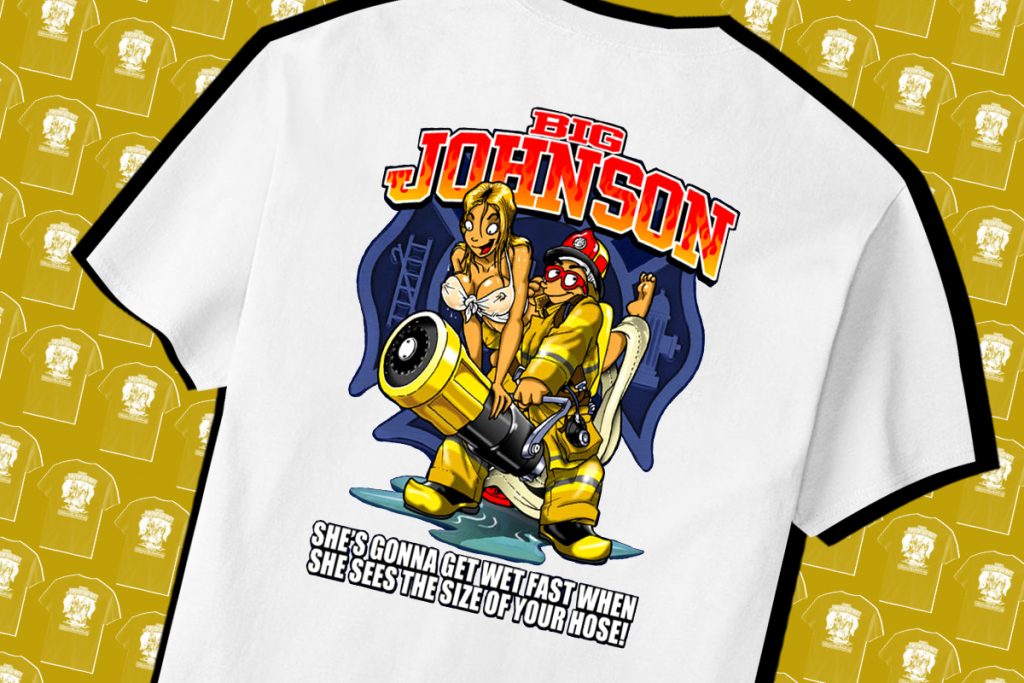 Craig and Garrett Pfeifer first started printing tees in 1986, modest screen print jobs where they’d produce shirts or sometimes promotional items like keychains, mousepads or even embroidery for clients. “We were based out of Baltimore, where the Preakness is held,” Craig Pfeifer says. “And the hottest T-shirt at the Preakness back then was a shirt called Big Pecker’s. It was for a local bar, Big Pecker’s Bar & Grill, which only served chicken. We thought it was funny, so we came up with an idea of doing Big Johnson—like Big Pecker but with Johnson Surfboards.” So they commissioned an illustrator to design the key character in the Big Johnson universe. E. Normus Johnson is a skinny, nerdy, ginger teenager (basically, a caricature of the brothers’ core audience), often surrounded by busty white women.

In 1989, Big Johnson started getting orders from West Coast retailers like Pacific Sun and Pacific Eyes & T’s. And so, the brothers expanded the line to include dozens of designs, hitting upon all sorts of male archetypes: firemen, weightlifters, golfers, whatever.  And just about all of these sexual innuendo t-shirts was a hit. The market had spoken: It wanted big dicks! Maybe it was a rebuff to the alleged ‘90s PC-ification of pop culture or a way for white brothers to hold onto a slipping sense of power. Either way, at its peak, Big Johnson would sell $14 million a year in tees!

But by the mid- to late-1990s, the king of big dick puns had run soft and flaccid. Craig Pfeifer attributes this to several factors: “When Hot Topic and Spencers came in, they wiped out all the mom ‘n’ pop T-shirt shops,” he explains. “Pacific Sun even knocked us off. After not buying from us for three years, all of a sudden Big Johnson baseball caps started popping up in their stores again. They told us, ‘Oh, we didn’t know. Our salesperson took it in, and they said we’ll buy them from you.’ But they never bought from us again.” Pfeifer had Big Johnson copyrighted in the U.S., but he and his brother figured that their company didn’t have the legal muscle (or money) to stave off the overwhelming competition.

Rip-offs weren’t just a domestic issue either. “Big Johnson was the number one bootlegged shirt in Brazil,” Craig Pfeifer says. When he and his brother tried to copyright it in Latin America, “there were 10 other people trying to get the Big Johnson trademark ahead of us. One of them was the biggest chain of retail department stores down there; they were selling everything in Portuguese.”

By 2001, Pfeifer says, “The phone stopped ringing. It took three years to get our shirts across the United States. There were another three years of strong sales and then probably three years of declining sales.” He sold his share of the business to his brother, getting out of what had evolved into an increasingly vicious retail market dominated by pop culture licensing and big-gun conglomerates like Iconix.

Today, Pfeifer’s Big Johnson life is long gone: “I have four daughters between the ages of 12 and 17, so I don’t wear the shirts around the house. I do, however, have a 6-foot tile picture of [E. Normus Johnson] on the bottom of my pool.” 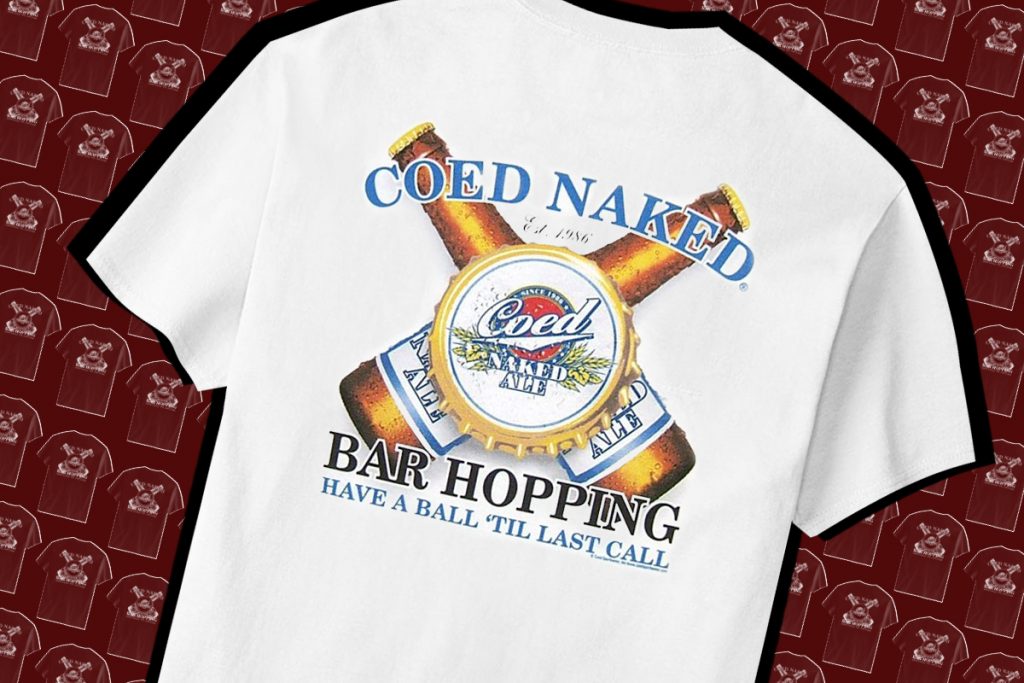 Scott MacHardy purchased the trademark for Coed Naked in 1991 with partners Mark Lane and Chas Folick. Their tees had similar sex puns to Big Johnson, but they were initially focused more around college life and less around blue-collar hobbies like fishing and hunting. Shirts like “Coed Naked Diving: Everything Looks Bigger Underwater” and “Coed Naked Lacrosse: Rough, Tough, and In the Buff riddled the East Coast.

The first coeds to “party naked” were at the University of New Hampshire, MacHardy’s alma mater. The company quickly spread to New England resort shops and roughly 10,000 smaller independent retailers. Like its contemporaries, the brand’s designs eventually broadened to include other professions such as: police officers (“Coed Naked Law Enforcement: Against the Wall and Spread ‘Em”) and firefighters (“Find ‘em Hot…Leave ‘em Wet”).

“People got pretty nervous when they saw the word ‘naked’ on a T-shirt at that time,” MacHardy says. “You wouldn’t even blink now. But back then, the double entendres we used as catchphrases would make people blush, which was also the magic of the product.”

Despite all the talk about naked flesh, the Coed partners did receive mainstream acknowledgment for their business acumen. They won the 1995 National Young Entrepreneurs of the Year Award from the United States Small Business Administration and traveled to the White House to attend a Rose Garden ceremony with President Bill Clinton. They brought the President a T-shirt: Coed Naked Interns.

By the start of Clinton’s second term, though, Coed Naked’s popularity took a dive. The shirts had already seeped into high schools through resort shops and via the hand-me-down network — where the tees were inevitably gifted downward to younger siblings. It didn’t help that high school administrators weren’t huge fans of the shirts. “They started putting in dress codes,” MacHardy explains. “They said, ‘You can’t have pink hair or piercings and you can’t wear Coed Naked shirts.’ At first we were flattered, but eventually, it took a toll because parents didn’t want to spend money on apparel that their kids could only wear in the summer.” College kids eventually stopped wearing the shirts, too. They had no interest in wearing a brand their younger siblings now adored. 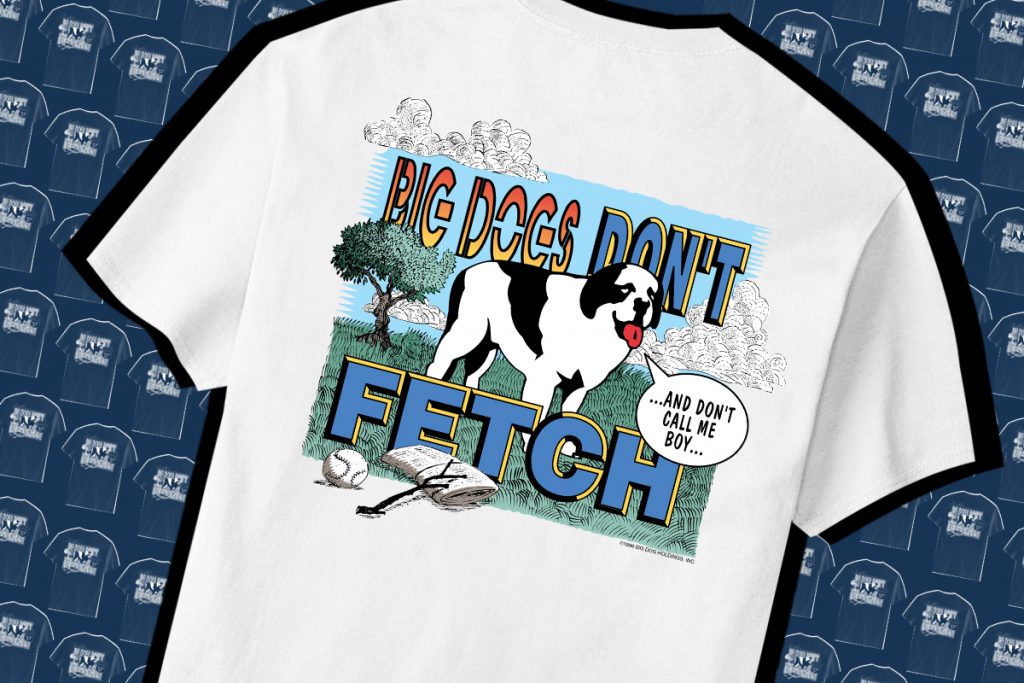 Big Dog got to the blue-collar conservative mentality long before Jeff Foxworthy and Larry the Cable Guy were household names. Their tees featured an amalgam of macho ideologies, jokes about pop culture and “get-off-my-lawn” grandpa-isms. The company ultimately transcended its novelty-shirt roots, somehow becoming a lifestyle empire. And at the height of Big Dog’s retail powers, it had as many as 220 stores operating across the country.

Surprisingly, however — despite all of the relatable Big Dog activities (e.g., “Fishing at the Crack of Dawn” and “If You Can’t Drive With The Big Dogs, Stay Off The Range!”) — Big Dogs’ best-selling T-shirt was a South Park parody, one they called “South Bark.” “Oh My God, they fixed Kenny!” it reads. Big Dog Sportswear Director Steve Dawson admits: “Of the thousands of shirts we made, that shirt outsold everything. And it’s the most rudimentary art ever.” (Not to mention a rip-off itself.) 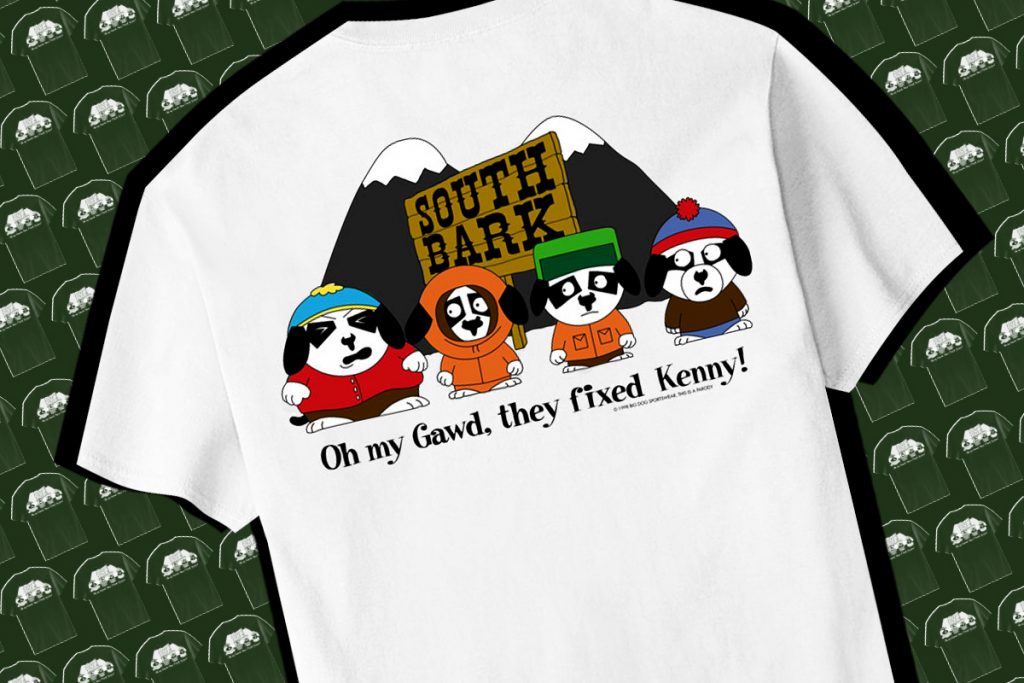 Today, Big Dog has refocused and doubled down on its clientele and its e-commerce offerings, with continued success, in part because it’s filled the space left wide open by the other fallen D-shirt brands. All the while, as Dawson explains, its sense of humor has swelled to a broader, more generic version of internet-friendly ersatz and vaguely threatening catchphrases. “If there’s a wrong place and a wrong time, I’ll be there,” says a Dog in sunglasses, flexing his dog-biceps on a newer shirt design. Another reads: “Shutting the f#$@% up is gluten free; add THAT to your diet!” 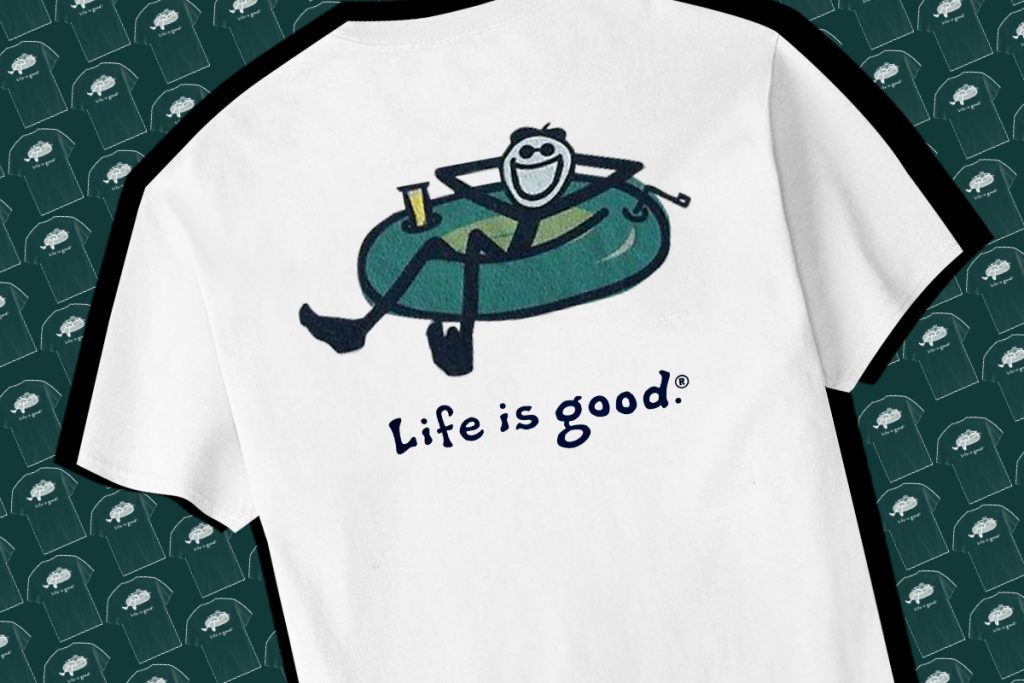 Another set of brothers, Massachusetts-reared Bert and John Jacobs, spent the early ‘90s thanklessly trying to sell bland music-inspired T-shirts up and down the East Coast. They would hit up neighborhood fairs, campus quads and dorm rooms.  The region is known for the highest density of colleges and universities in the world, often getting kicked out for pushing the envelope with campus security and overstaying their welcome. “For some crunchier schools, like the University of Vermont, the shirts would connect,” remembers John. But mainly, the brothers sold just enough shirts to live above the poverty line.

Everything changed, however, in 1994. As was their custom after returning from a road trip, the brothers threw a backyard kegger where they pinned up new designs on the wall and asked their friends for feedback. One design had everyone talking: A stick figure hanging out in an inner tube. They named him “Jake,” a stick figure who always seemed to be having a good time and who ultimately became the face of their cash cow, a line of shirts they dubbed “Life Is Good”.

The brand’s appeal is so reductive and simple that it hasn’t wavered — even 20 years later. In fact, it’s become a symbol of the pan-spiritual affirmation of life. For instance, after the 2013 Boston Marathon bombing, which took place mere blocks from their corporate headquarters, the brothers released a charitable tee. “We looked at what was already out there,” Bert explained to Inc. “A lot of ‘Be Strong’ and ‘Boston Strong,’ that tough Irish mentality. I don’t knock it. But it’s almost like they’re suppressing emotion: We’re so strong, let’s just move on. Life Is Good focuses on what’s right in the world.”

The shirt became their fastest-selling product to date.

So in the end, is the lesson of the D-shirt, that nondescript spiritual positivity is the key to longevity (and life)? Or is it all some cynical capitalist joke?

After all, the 1990s D-shirt businesses seemed to last in proportion to how edgy they were trying to be — the edgier they were, the quicker they flamed out. While it’s easy to see that most of these shirts’ cardinal sin was that they were more unfunny than mean-spirited, the people behind these companies are a thousand times less problematic than the T-shirt tycoons that followed — men like Dov Charney or Mike Jeffries (both of whom no longer run their respective companies, American Apparel and Abercrombie & Fitch). The former was accused of sexually assaulting his models and the latter publicly stated he doesn’t want “fat or unattractive people” wearing his brand. It’s one thing to print a shirt that’s an archaic jab at women; it’s an entirely different thing to sexually harass everyone you come in contact with.

If anything, the D-shirt mini-moguls of the ‘90s are really only guilty of one thing: Being corny. The D-shirts, as intentionally trivial as they were, are a cultural artifact — a visual correlative for a bygone, chaotic end-of-’90s America where tiny, non-tech startups could momentarily get a seat at the table. A time when your dumb little idea could become a kinda-sorta big deal for a couple years without having to go through giant gatekeepers. A time when you could get away with wearing your heart on your sleeve and didn’t have to worry so much if you were being ironic, post-ironic or normcore. It was just who you were.

Can someone claim riches through the creation of a theme-style D-Shirt today?  Probably not.

Jonny Coleman is a writer, music supervisor, and self-facilitating media node. His work has appeared in Pitchfork, Playboy, FACT, Vice, and other corners of the infinite content hole.