Is the Droid Robot winning?  As it turns out, a look at the latest results from an online poll reveals that Google’s Android OS may be becoming quite a problem for Apple’s iOS. While the majority of adults deemed both the Google Android platform and Apple iOS as very popular this October, Android maintained a small lead with 53.0% voting it as “hot” compared to Apple’s 47%. 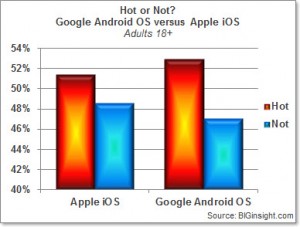 These numbers become very interesting  when viewed upon by generation using the chart below. 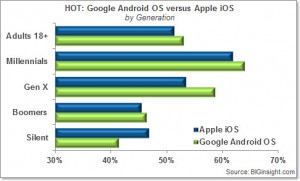 The Bottom Line: While both platforms are incredibly popular, it seems that the children of our future – Millenials and Gen X-ers – are starting to view Google Android as the mobile future platform, at least for the time being or until someone else builds a better mousetrap.