President Barack Obama endorsing sweeping gun restrictions in the wake of the school shootings in Newtown, Connecticut, prices for handgun magazines are surging on EBay (EBAY) and semi-automatic rifles are sold out at many Wal-Mart Stores Inc. (WMT) locations.

Wal-Mart, the world’s largest retailer, said yesterday that it would continue to sell guns, including rifles like the one used at Newtown, where 26 people, most of them children, were killed on Dec. 14. By contrast, Dick’s Sporting Goods Inc. (DKS)suspended sales of similar guns at its more than 500 stores.

Searches of five kinds of semi-automatic rifles on Wal- Mart’s website showed them to be out of stock at stores in five states, including Pennsylvania, Kansas and Alabama. Wal-Mart doesn’t sell guns online, instead asking customers to input a zip code to see if their local store carries a specific weapon.

“We remain dedicated to the safe and responsible sale of firearms in areas of the country where they are sold,” David Tovar, a spokesman for Wal-Mart, said yesterday. He didn’t immediately respond to a request for comment on this story.

Wal-Mart has about 10 modern sporting rifles, the gun industry’s term for firearms that look like an M-16 military rifle, listed on its website. The retailer removed a description and picture of the Bushmaster AR-15, which was the model used in Newtown, after the shootings. 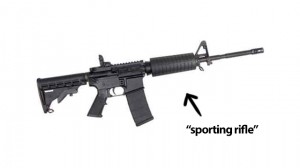 In 2006, Wal-Mart reduced the number and variety of guns it offered in stores, and replaced them with more upscale products such as exercise equipment. It then reintroduced firearms to many stores in April 2011 as part of strategy to add merchandise back to shelves and revive sales growth at its Wal-Mart locations in the U.S.

The move may have helped as U.S. Wal-Mart stores posted their first gain in same-store sales in more than two years in October 2011. Wal-Mart doesn’t disclose how many guns it sells, though at an analysts’ meeting in October it said gun revenue gained 76 percent in the first half of this fiscal year. The chain advertised a Sig Sauer M400 as one of its Black Friday doorbusters last month, offering the rifle for $50 off at $867.

Cabela’s Inc., an outdoor retailer that also sells guns, didn’t return several calls seeking comment on whether it planned to change its firearm policies. Hunting equipment, which includes firearms, made up 41 percent of Cabela’s sales in 2011, according to a company filing. The retailer doesn’t provide sales data for just guns.

On EBay Inc.’s auction website, shoppers have recently bid up gun magazines. The current bid for four Glock handgun magazines, ammunition for one of the guns used at Newtown, is $118.37 compared with $45 on the day before the shooting. The bid for seven Glock magazines hit $201 on Dec. 17 from $71.01 before the massacre.

Gun buyers have flooded other firearms retailers too. The Hyatt Gun Shop in Charlotte, North Carolina, racked up more than $1 million in sales yesterday for the best single-day performance since the store opened in 1959, according to Justin Anderson, director of online sales. At the top of shoppers’ lists was the Bushmaster AR-15, the model of rifle used at Newtown that sells for as much as $4,000 and had almost sold out, he said.

Revenue at one of the largest U.S. gun stores surpassed even the spike just after Obama was elected president in 2008, Anderson said in a telephone interview. Sales weren’t as robust when Obama was re-elected last month because the president hadn’t backed major new gun laws, he said.

Today, Obama said his administration would come up with “concrete proposals” by next month to curb gun violence.

“It’s kind of the perfect storm for the gun industry,” he said. “When these things happen, even though it’s sad, it does pick up sales.”

Wal-Mart has received some pressure to curb gun sales in the past. That continued this week when Lauren Buglino, a fourth-grade teacher from the Bronx, created an online petition on Change.org exhorting the retailer to stop selling rifles like the one used at Newtown. It had more than 57,000 supporters today.

Wal-Mart entered into an agreement in 2008 with the Mayors Against Illegal Guns that included video recording of purchases and the use of databases to identify people who have bought guns recovered in crimes.

When Wal-Mart added guns to stores in 2011, Mayor Thomas Menino of Boston criticized it for trying to increase the number of guns on the streets, according to the Boston Herald.